I may not be a big football fan, but I am a fan of Game Day Food and Super Bowl Sunday. A must have for game day is of course hot chicken wings. I did a lot of recipe testing to find a recipe that delivered super crispy wings without having to fry. This recipe from Bon Appetit delivered on the crispiness and taste without being dry. It’s a perfect game day food and super easy to make.
From by the bay wishing you yummy Game Day memories!
Maryann 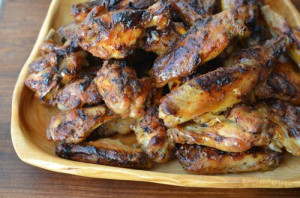 CRISPY BAKED HOT CHICKEN WING RECIPE
Adapted from Bon Appetit Test Kitchen
INGREDIENTS
HONEY BUFFALO SAUCE
1 tablespoon unsalted butter, melted
1/4 teaspoon cayenne pepper
1/4 teaspoon freshly ground black pepper
1/4 teaspoon kosher salt
1/4 cup hot pepper sauce
1/4 cup honey
WINGS
3 pounds chicken wings, tips removed, drumettes and flats separated
1 tablespoons vegetable oil
1 1/2 teaspoons fine sea salt
1/2 teaspoon freshly ground black pepper
DIRECTIONS
Preheat oven to 400°. Set a non stick wire rack inside each of 1 large rimmed baking sheet lined with foil. Place all ingredients in a large bowl; toss to coat. Place wings on the prepared rack and spread out in a single layer. Bake wings until cooked through and skin is crispy, 45–50 minutes. Remove wings from oven place in bowl, pour sauce on top toss and place back in the oven. Bake for 10 minutes until it starts to brown. Serve immediately.
Oatmeal, we all know it’s heart healthy and a great breakfast to start your day. It wasn’t until I tried steel cut oats that I went from liking oatmeal to loving it. Oats are grass and the grain is called a groat. Steel Cut oats are made from the inner portion of the oat kernel. The grain is run through steel blades and cut into tiny pellets. It’s the least processed of the oat cereals and the results when cooked is a nuttier taste with more texture. This is a  much more chewy, hearty and tasty oatmeal. Cooking with steel cut oats takes longer to make but it’s well worth the results. This oatmeal stands alone well, but it you are looking to pump up the flavor top your oatmeal with maple soaked raisins for a real breakfast treat!
From by the bay wishing you some tasty maple soaked food memories!
Maryann 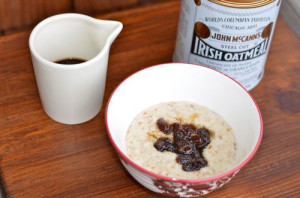 Directions
In a large sauce pan, melt the butter and add the oats. Stir for 2 minutes to toast. Add the boiling water and reduce heat to a simmer. Keep at a low simmer for 25 minutes without stirring or until liquid is almost gone. Add the milk and simmer for 10 minutes, Add brown sugar and salt to the oatmeal stirring gently to combine and cook for an additional 10 minutes. Spoon into a serving bowl.

Directions
In small sauce pan add the raisins and maple syrup and gently simmer for 5 minutes. Set aside and let cool and let the raisins continue to soak in the syrup. Rewarm to serve on top of hot oatmeal or any other breakfast favorite such as pancakes , waffles or french toast. 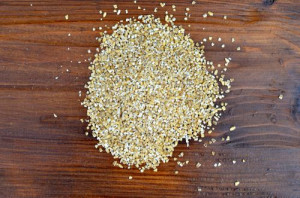 There is nothing better on a blustery cold day then a warm bowl of soup. I have fond memories of my grandmother taking out her dutch oven on such days and making this soup from the staples she always had in her pantry. Her original recipe didn’t include the bacon. I happened to have some bacon leftover in the fridge and decided to use it. You could just as easily not use the bacon and just throw all the ingredients for the soup into the pot and simmer away, making this about as easy as any soup you could make. If you are feeling up for it by all means take the extra steps to fry the bacon and saute your onions and celery, the results were delicious. What really makes this potato soup so magnficent to eat, is not the bacon, it’s the dumplings you simmer into the soup at the end. Again, these are no fail dumplings just stir and drop into the hot soup to simmer into yummy small white balls soaked with the flavor of the soup. It’s the perfect comfort food to warm you from the harsh cold of winter.From by the bay wishing you warm potato food memories!
Maryann 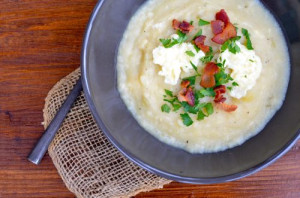 Potato Soup with Small Dumplings
Serves 6
Ingredients for soup
4 ounces thick bacon, chopped
6 cups potatoes, peeled and cubed
1 cup celery, chopped
1 cup onion, chopped
5 cups water
1 tablespoon fine sea salt
1 teaspoon fresh ground black pepper
3-4 cloves
optional: chopped parsley for garnish
Ingredients for drop dumplings
1 egg, lightly beaten
1/3 cup water
1/2 teaspoon fine sea salt
3/4 cup all-purpose flour
Directions
In a Dutch oven cook bacon until crisp. Remove bacon with slotted spoon onto paper towel and set aside. In the bacon fat saute the celery and onion until softened. Add the potatoes, water, salt, pepper and cloves. Bring to a boil. Reduce heat; cover and simmer for 1 hour or until vegetables are tender. Remove the cloves out of the soup. With a potato masher, puree most of the vegetables.  Adjust seasoning with salt and pepper. If the soup is too thick for your preference you can add some water and continue to simmer. To make the dumplings, combine the egg, water, salt and flour mixing until smooth. Drop by teaspoonfuls into the boiling soup. Cover and simmer until the dumplings are cooked through, about 10 minutes. Garnish with chopped parsley and crisp bacon pieces. 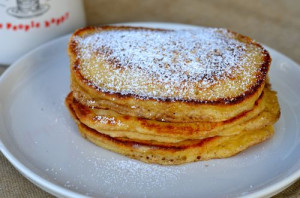 Every year as I am looking towards the holiday, I’m stocking up on all kinds of food items for entertaining my family and friends. Once we get past Christmas I’m beginning to see what I still have left and how to use it. Something I buy every year is eggnog, I can’t help myself, but no one really seems to drink it anymore. It doesn’t stop me from buying it though, in fact, I like to use eggnog to transform something ordinary into a delicious holiday or post holiday treat. This year was no different as I looked into the refrigerator to see a bottle of eggnog with a mid january expiration date, I decided  to make pancakes for a weekend brunch with fantastic results. The eggnog gave a richer egg taste to the pancakes, but the pancakes were still light and fluffy. I think it’s the perfect comfort food for a cold January weekend morning to bring some warmth and a little post holiday cheer into your day.

From by the bay wishing you, eggnog food memories!

Directions
In a medium bowl combine all dry ingredients and mix. To this add the eggnog and eggs and combine. Do not over mix. Batter will be a little lumpy.  Set aside for 20 minutes. Heat a griddle pan and spread 1/4 cup of batter for each cake, Cook two minutes on the first side until the edge starts to bubble and flip and cook another minute. Place on baking sheet and keep warm in oven until all cakes are made and ready to serve. Serve with confectionery sugar and maple syrup 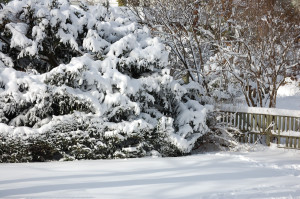 Check out the latest issue of Mermaids of the Lake including my feature on Skating into 2014 with Hot Chocolate and Cranberry Tassies:

Wishing all a very happy, healthy and prosperous New Year – filled with wonderful food memories made with family and friends! 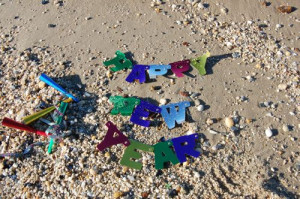