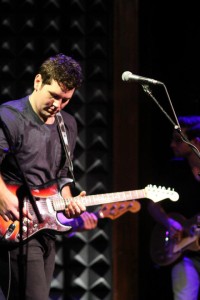 As we appropriate Labor Day weekend, I decided for my official Labor Day cocktail to combine two of my favorite drinks, rose and a margarita – and the combination of these two drinks is a Rose Sangarita, adding some of the fresh seasonal fruit so abundant right now to enhance the flavor. i like to use berries combined with some stone fruit so bring in the blackberries, raspberries and blueberries along with the peaches, apricots and plums to make your favorite sangarita!

From by the bay, wishing you sangarita food memories!! Maryann 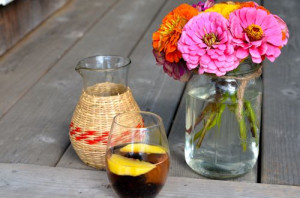 Put all the ingredients into a carafe. Mix well and refrigerate for minimum 3 hours and up to 1 day. Serve cold.

Here is a perfect summer side dish using all the wonderful colored string beans you can find in markets this time of year. The special ingredient that makes this salad so delicious is the peppery taste and earthy aroma of cumin. It lends an exotic note to a simple dish.

From by the bay, wishing you exotic food memories! 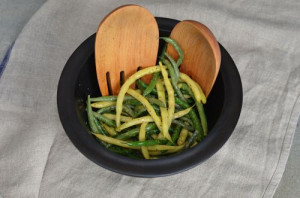 Blanch the string beans in a large pot of boiling salted water for 3 minutes until crisp-tender. Drain immediately and immerse in a bowl of ice water. When cool drain string beans and place in a large bowl. Prepare dressing by whisking the remaining ingredients in a small bowl. Pour dressing over string beans and mix well.  Serve at room temperature. 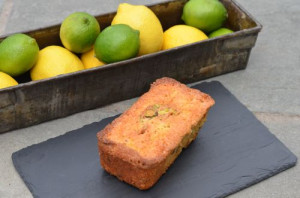 Directions
Arrange a rack in middle of oven; preheat to 325°. Coat a 9x5x3″ loaf pan with nonstick spray. Dust pan with flour; tap out excess.Whisk 2 cups flour, salt, and baking powder in a medium bowl. Using an electric mixer, beat butter on medium speed until light and fluffy, 2–3 minutes. Add sugar; beat until well incorporated, 1–2 minutes. Add eggs one at a time, beating to blend between additions. Add juices and zests; beat until well combined (mixture will look curdled), 2–3 minutes. Add dry ingredients; reduce speed to low and beat just until blended. Fold in 3/4 cup pistachios. Pour batter into prepared pan; smooth top. Sprinkle remaining 1/4 cup pistachios over.Bake cake, rotating halfway through, until a tester inserted into center comes out clean, about 1 1/2 hours. Transfer to a wire rack and let cool completely in pan. Run a sharp knife around sides to loosen; unmold cake. DO AHEAD: Can be made 1 day ahead. Store airtight at room temperature.

A classic Greek salad combination is watermelon with feta., it’s one of those perfect food pairings- sweet and juicy watermelon paired with creamy and salty feta cheese. This recipe gives this classic a new twist by grilling the watermelon. The natural sugars in the watermelon caramelizes when grilled, heightening the sweetness of the fruit. It’s and easy salad to make and perfect summer food fare. Enjoy!

From by the bay wishing you sweet and salty food memories! 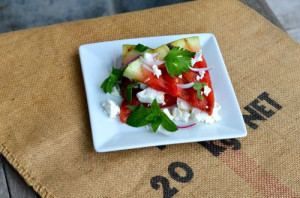 Peel and halve the red onion and cut into very fine half-moons and put in a small bowl adding the juice of two limes. This will soften the onion and making it more transparent and pink.
Slice the the watermelon into 1 inch slices including the rind. Cut into triangle shapes. Heat grill and brush both sides of each watermelon slice using 1 tablespoon olive oil. Place on grill for about 3 minutes per side, until  charred.  To assemble the salad place watermelon on platter. Crumble feta cheese over the watermelon. Toss over the salad the parsley and mint. Sprinkle the red onion over the salad along with lime juice. Drizzle remain olive oil and add pepper to taste.  Serve immediately. 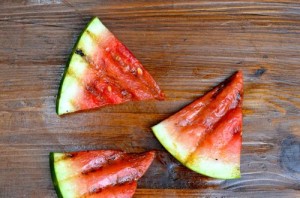 Trying to make the most of this season’s fresh corn, lead me down the path of making corn into a dessert. Summer’s sweet corn makes a wonderful ice cream especially paired with another summer favorite blueberries.  I use both the cut kernels and the cobs with milk, sugar and cream to create this delicious creamy ice cream, mixed and topped with blueberry compote. When you taste the ice cream, it taste familiar and sweet. The taste of corn is subtle and rich. It’s a perfect summer treat!

From by the bay,wishing you summer sweet corn memories! 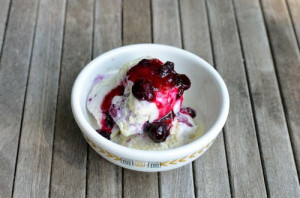 Cut kernels off each ear of corn and place into a large saucepan. Break cobs into pieces and also add to pan. Add to the pan the milk, cream , 3/4 cup sugar and xanthan gum. Place on medium heat , bring mixture to a low boil for 5 to 10 minutes until mixture is thicken slightly and sugar is dissolved. Remove from heat, remove cobs. Using an immersion blender, puree kernels. ( You can also use a blender to liquidfy but the immersion blender is quickest and easier clean up). Let corn mixture infuse for about an hour and then pass the mixture through a fine sieve into a bowl. When straining make sure you are using the back of a spoon to push the liquid through. Also scrap the liquid from the bottom of the strainer in the bowl. Place bowl in the refrigerator to chill for 2 to 3 hours. In the meantime, to a small sauce pan add blueberries and 1/4 cup sugar in a small saucepan . Place on medium heat until the blueberries start to pop and mixture thickens. Set aside to cool. Make the sweet corn mixer in an ice cream maker according to directions. Right when the ice cream is ready slowly pour the blueberry sauce into the ice cream to swirl one or two times. Pour into a freezer safe container and store in freezer until ready to serve.