As I was growing up, there was no finer signal that fall was near than when my grandmother make plum dumplings. The recipe was one my grandmother brought to the United States from her homeland of Gottschee, which long ago was a part of Austria. My grandfather would grow small italian plums and when they were ripe my grandmother would make dumplings which were similar to large gnocchi, filled with the plums and sugar. You would cut open the dumpling to a burst of purple sweet almost jam like filling. It was delicious!!!  Yes, making this dumpling dough sounds a bit daunting , but you can press it into shape easily with your hands and as long as you pick any holes with your fingers you’ll have the same results in taste and perhaps the look is slighlty more rustic, but the taste will still deliver. This is traditionally a dessert but by the bay this is a special dinner. The season for these sweet italian plums are short so celebrate Fall this weekend and enjoy!

From by the bay, wishing you plum bursting food memories! 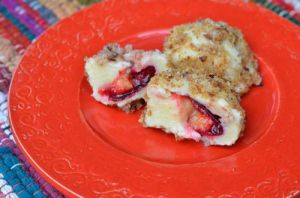 Peel and chop potatoes. Place in a medium sauce pan with cold water and 1/8 teaspoon of salt. Bring to a boil and cook until tender. Drain and cool. In a bowl mash potatoes. Measure two cups of mash potatoes and place in large mixing bowl. Add flour and salt and mix well. Add the egg and oil and mix dough to form a ball. Add more flour if the dough is too sticky . Cover with plastic wrap and set aside for 30 minutes.  In the meantime, bring a large stock pot of salted water to a boil. On a lightty floured surface roll out the dough to about a 1/3 of an inch . Cut dough into 16 squares or pat into 16 circles, flour your hands to handle the dough.  Sprinkle the inside of the plums with sugar. Place one plum ( or 1/2 plum if the plums are medium size) to the center of each circle of dough.  Gently bring up corners of the dough to center and pinch edges to seal.  Carefully add dumplings to boiling water. Reduce heat; cover and simmer for 20-25 minutes or until a toothpick inserted into a dumpling comes out clean. In a medium sauce pan melt butter  until it starts to foam and then add breadcrumbs and saute until they start to brown. Remove from heat. Gently roll the dumplings in the bread crumbs and place on a serving platter. Sprinkle with extra sugar and serve immediately. 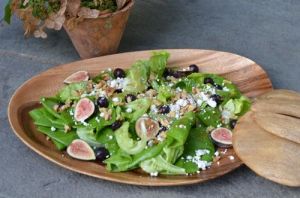 Directions
To make dressing combine olive oil, vinegar, maple syrup and mustard all  in a glass jar and shake vigorously. Keep to the side until ready to use. Shake again before pouring onto salad.
To make salad place lettuce, grapes and figs in a bowl and add 1/2 the dressing and gently toss. Add salt and pepper to taste and toss again. Arrange on a serving platter. Sprinkle salad with the goat cheese and walnuts. Drizzle extra dressing on top of the salad and serve.

This dish highlights the bold flavor of broccoli rabe with it’s nutty and distinctive bitter taste, that is much loved in southern italian cooking. I love broccoli rabe not only for the taste , but also that it’s packed with loads of vitamin C and A as well as potassium, while being low in calories. So this delicious and light dish features an easy pesto , grilled shrimp and bread kicked up with some red chili flakes for a little heat. It’s perfect light, delicious and vibrant colored meal!

From by the bay wishing you a bold broccoli rabe  food memories! 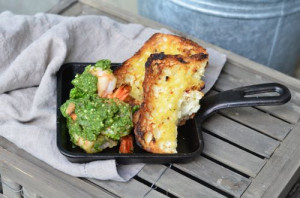 Drain the broccoli rabe and squeeze out any excess water. Pull out about 1/2 cup of the broccoli rabe, especially the florets and set aside. Place the remaining broccoli rabe  ( approximately 1 cup) in the bowl of a food processor and puree until it is a coarse paste. Add 1/2 cup olive oil, almonds, lemon zest, lemon juice and parmigiano and puree until smooth. Taste and adjust the seasoning salt and pepper to taste. Serve room temperature.

In a small bowl add remaining 2 tablespoons olive oil, minced garlic and red chili flakes and mix. Cut the ciabatta bread length-wise in half and brush the inside with the olive oil mixture.

Prepare grill . Remove shrimp from marinade and cook until the shrimp turns pink, about 1 1/2 minute on each side depending on the heat of the grill. Remove shrimp and place bread on the grill , cut side with olive oil past down and grill until toasted brown. Remove from grill.

To serve dish add shrimp , cover with broccoli rabe pesto and cut bread into slices arranging around the shrimp and pesto. Drizzle with a little olive oil before serving.

Note: This could also be make on stove top in a grill pan. Heat a tablespoon of  olive oil to cook shrimp on both sides until pink and then grill bread face down in pan until toasted.

The key ingredient to this marinade is the moroccan spice mixture of ras-el-hanout , a exotic mixture that might include up to 30 ingredients such as  rosebuds, cardamon, cinnamon, nutmeg, allspice, turmeric, coriander, cloves, lavender, ginger, pepper and mace. Obviously, you would want to buy this already prepared. When I first started to cook with this moroccan spice it was hard to find ras-el-hanout but today it’s in many supermarkets and of course readily available on-line.  You can double this marinade and use on leg of lamb as well.  The results are a very flavorful lamb with a minimum of effort.  Enjoy!

From by the bay, wishing you exotic moroccan food memories! 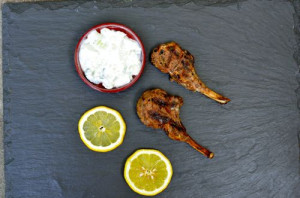 To make marinade place all marinade ingredients into a food processor and pulse into a paste. Pour marinade into a resealable plastic bag along with lamb chops. Rub paste into chops and keep refrigerated for at least 4 hours .  Bring to room temperature before cooking on grill or in grill pan using a little olive oil a few minutes on each side until done ( depending on thickness and your preference of color). 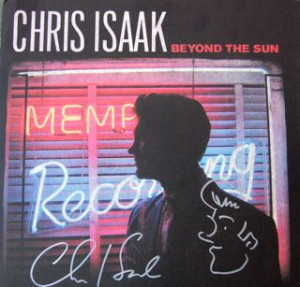