Enjoy the early days of Spring with this bright stew using veal with dill, peas and carrots. It’s the perfect dish using early spring vegetables from your garden or market!

From by the bay, wishing you dill filled spring memories! 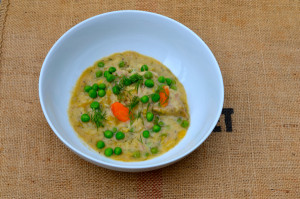 Directions:
1. Preheat oven to 350 F
2. Melt 8 tablespoons (1 stick) of butter in a heavy oven-proof casserole over medium-low heat. Add the veal and cook, turning frequently, without browning.
3. Stir 3 tablespoons flour, the nutmeg, salt, and pepper together in a small bowl, and sprinkle over the veal. Continue to cook over low heat, stirring, for 5 minutes. The flour and veal should not brown.
4. Add the carrots, onions, 3 tablespoons of the dill, and enough stock just to cover the meat and vegetables. Raise the heat to medium, bring to a boil, cover, and bake in the oven for 1 ½ hours.
5. Remove the stew from the oven and pour it through a strainer placed over a bowl. Reserve the solids and liquid separately.
6. Return the casserole to medium heat and melt the remaining 4 tablespoons of butter in it. Sprinkle in the remaining 5 tablespoons flour and cook over low heat, whisking constantly, for 5 minutes.
7. Whisk the reserved cooking liquid slowly into the butter and flour mixture and bring to a simmer. Cook slowly, stirring constantly, for 5 minutes.
8. Whisk in the cream and the remaining 2 tablespoons dill, and season with salt, pepper, and nutmeg. Return the veal and vegetables plus the frozen baby peas to the casserole and simmer together to heat through, about 5 minutes. Transfer to a deep serving dish and serve at once. 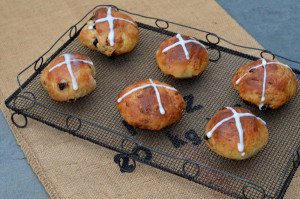 Thinking about the week ahead, I decided to research making hot cross buns. This recipe by Ree Drummond (The Pioneer Woman), was the one I decided I liked the best. I never much cared for the hot cross buns in the bakeries, much of that dislike was around the bun being too sweet and some bakeries would use dried fruit I didn’t like and occasionally it was candied. It definitely put me off hot cross buns, This recipes has an easy technique for making a yeast dough, a nice amount of spices and Ree suggested dried fruit like raisins and cranberries. The resulting bun is terrific and really changes not only my point of view about these Easter treat, but my whole family!

From by the bay, wishing you little bun food memories! 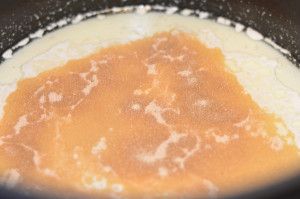 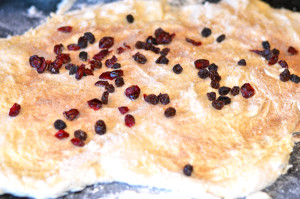 Combine 2 cups milk, canola oil, and 1/2 cup sugar in a saucepan. Stir and heat until very warm but not boiling. Turn off the heat and allow to cool until mixture is still warm, but not hot–about 30 minutes.

Sprinkle yeast over mixture. Add 4 cups of flour and stir to combine. Mixture will be very sticky. Cover with a towel and set aside for 1 hour.

Combine 1/4 cup sugar with cinnamon and whatever other spices you want to use.

Pinch off ping pong or golf ball-size bunches of dough. With floured hands, quickly roll it into a ball, then turn the edges under themselves slightly. Place on a lightly greased cookie sheet. Cover and allow to rise in a warm place for at least 30 minutes…an hour-plus is better. 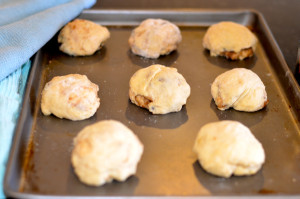 Mix 1 egg white with a splash of milk. Brush onto each roll.

Bake for 20 minutes, give or take, or until tops of buns have turned nice and golden brown.

Remove from pan and allow to cool on a cooling rack.

Mix 1 egg white with enough powdered sugar for icing to be very thick. Splash in milk as needed for consistency.

Add icing to a small Ziploc bag and snip the corner. Make icing crosses on each roll, making sure they’re completely cooled first. 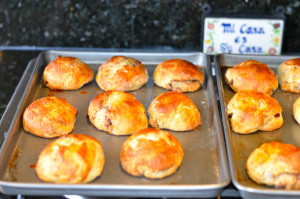 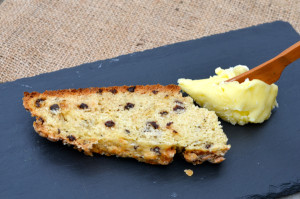 Although I’m not Irish, I have always enjoyed eating Irish Soda Bread.  St. Patrick’s Day is the unofficial start of Spring. After a long winter, you start to see the signs of spring. The crocus start peeking out of the ground, there is a big outdoor parade with lots of green the official color of spring and then there is Irish Soda Bread. I had some Irish good luck when my mother’s close friend Nancy, shared her family recipe with me. I find this bread pretty easy to make and quite forgiving in the preparation. Ready to celebrate Spring with some of your own good luck?

From by the bay wishing you some good luck food memories of your own! 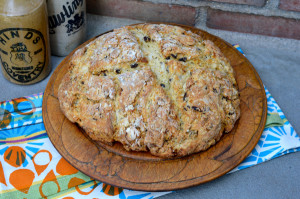 Ingredients
3 1/2 cups flour, plus a tablespoon to mix with currants

Combine the flour, sugar, baking soda, baking powder, caraway seeds and salt in the bowl of an electric mixer fitted with the paddle attachment. Add the butter and mix on low speed until the butter is mixed into the flour.

With a fork, lightly beat the buttermilk and egg together in a measuring cup. With the mixer on low speed, slowly add the buttermilk mixture to the flour mixture. Combine the currants with 1 tablespoon of flour and mix into the dough. It will be very wet.

Dump the dough onto a well-floured board and knead it a few times into a round loaf. Place the loaf on the prepared sheet pan and lightly cut an X into the top of the bread with a serrated knife. Bake for 45 to 55 minutes, or until a cake tester comes out clean. When you tap the loaf, it will have a hollow sound. Cool on a baking rack. Serve warm or at room temperature. 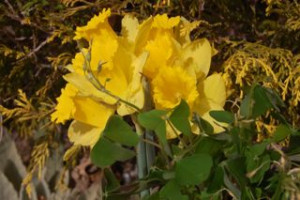 A recipe to delight – the creamiest of grits, topped with sweet succulent shrimp tossed among red pepper and onion slices with some heat from the butter and to cut through that richness some pickled celery.  Inspired by one of the best meals in Nashville and adapted by this northern girl , who can’t find okra so easily out of season but celery is a good fill in and using some sriracha for heat since it’s a condiment of the moment to add the right amount of heat to the dish. Enjoy.

From by the bay, wishing you a shrimp and grits food memory! 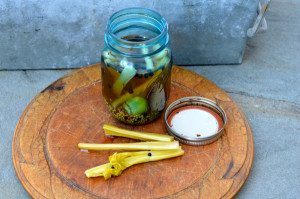 Bring the vinegar, sugar, and salt to a boil in a small saucepan. Stir until sugar and salt are dissolved. Remove from heat and add garlic, mustard seed, peppercorns, chili flakes. Place the celery pieces in a large bowl (preferably glass or ceramic) and pour the vinegar mixture over it. Stir to combine spices. Make sure all the pieces are submerged in the brine. Allow to cool completely (at least a couple hours) before serving. If you would like to make longer stalks into pickles, you can cut them to the length of the tallest wide-mouthed Mason jar you have. Stand them upright in the jar and pour the brine over them. Cover tightly. As the pickles cool, you may have to shake the jar (carefully!) to distribute the spices and brine 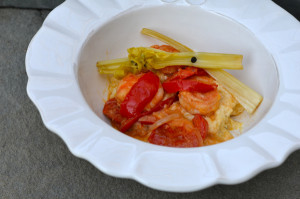 For the flavored butter

To make the grits

Heat all the ingredients except the grits and cheese in a pan on the stove. Turn the heat to low and then add the grits. Stir frequently until soft, about 30 minutes, then add the cheese.

To make the hot butter

Mix all the ingredients together thoroughly.

To prepare the shrimp and assemble dish

In large saute pan, heat the oil and add the bell peppers and onions. Saute until starts to soften. Add shrimp and cook 1/2 way, add the butter and continue to cook until shrimp is done. The shrimp should be pink and no longer translucent. Serve over grits and garnish with pickled celery.

I’ve been exploring using rye flour in my cooking. I love the hardy deep taste of rye. Besides the delicious rich taste here are a few things you probably didn’t know about rye:

I made these rye waffles mixing both rye and white flour together. The added flavor comes from using sour cream in the waffle batter. This is a yummy breakfast.

From by the bay, wishing you delicious rye food memories! 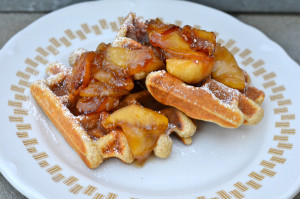 4 Jonagold Apples (or any other good cooking apple, such as Braeburn or Granny Smith)
2 tablespoon unsalted butter
4 tablespoons brown sugar

Peel and core apples, then slice thinly. Toss apple slices with sugar until thoroughly coated. Melt butter in a saucepan, add apples and cook over medium-high heat until very soft and tender, stirring occasionally, about 10 minutes. Serve caramelized apples over top of waffles.