Here is a delicious, quick and oh yes, healthy meal – Spicy Shrimp Tacos with Red Cabbage Slaw. It’s great to serve family style for ease. It also makes a great meal for guests since it can be prepared quickly and most of it in advance. This is one of my favorite go to summer dishes, because it’s light , easy and cool but of course it’s great all year round !

From by the bay, wishing you spicy taco food memories! 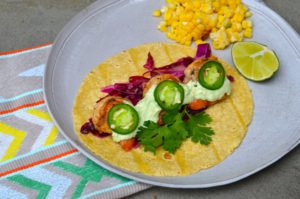 To make the Red Cabbage Slaw

In a medium bowl add the lime juice, orange juice, olive oil and sugar. Whisk together until sugar is dissolved. Add the red cabbage to the bowl and mix until cabbage is coated with the dressing. Add salt and pepper to taste. Let sit in the refrigerator covered for approximately 4 hours before serving.

To make the Avocado Sauce

In a small food processor or blender add the avocado, lime juice, sour cream and salt. Blend until smooth. Place in a covered container and place in the refrigerator until ready to use.

To make the Spicy Shrimp Taco

Heat a grill pan until hot, add the shrimp and grill approximately 2 to 3 minutes per side or until the shrimp turn opaque. Warm soft tortillas in the microwave for a minute. To serve, place the shrimp, slaw, avocado sauce along with garnishes of lime, cilantro and jalapeno on platters and allow guests to make their own tacos.

To welcome Fall and celebrate my German heritage, I made this platter of cider braised bratwurst and then pan seared both the brats and some crisp apples all served on a red cabbage slaw, It was the perfect autumn dish a study in contrasts : slightly sweet and salty, softened apples mixing with the crispy slaw. It’s my modern take on the more classic brats with sauerkraut.

From by the bay, wishing you Fall German food memories! 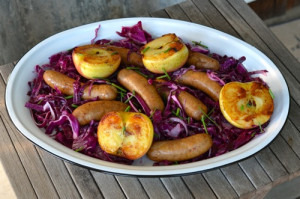 4 apples , skin on cut in half

In medium sauce pan add bratwurst and cider, bring to a simmer and cover for 15 minutes remove from heat. Remove bratwurst remove brats from pan and set aside. Heat oil in a large cast-iron or other heavy skillet over medium-high heat. Add apples, cut side down, and cook, turning occasionally, until golden brown, 5–8 minutes. Prick brats with a fork, add to skillet with apples, and cook, turning occasionally, until browned, 5 to 8 minutes. Add wine and vinegar to skillet. Bring to a boil, reduce heat, and simmer until thickened (liquid should coat a spoon), about 4 minutes.

To serve place red slaw on a platter , add apples and brats and enjoy!

I love looking for inspiration and sometimes the source can be surprising. Such is the case for this delicious slaw made of beets and red cabbage. Both ingredients were left over from “experiments” with natural dyes for color Easter eggs a few weeks ago. I decided to combine the ingredients with really fantastic results for a modern twist on a traditional classic. The color is vibrant and the taste is crisp and fresh. This will definitely be a a go to side dish for many of my summer barbecues.
From by the bay wishing you vibrant food memories!
Maryann 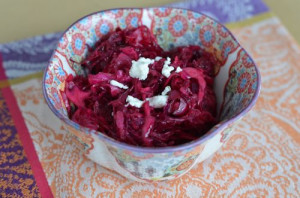